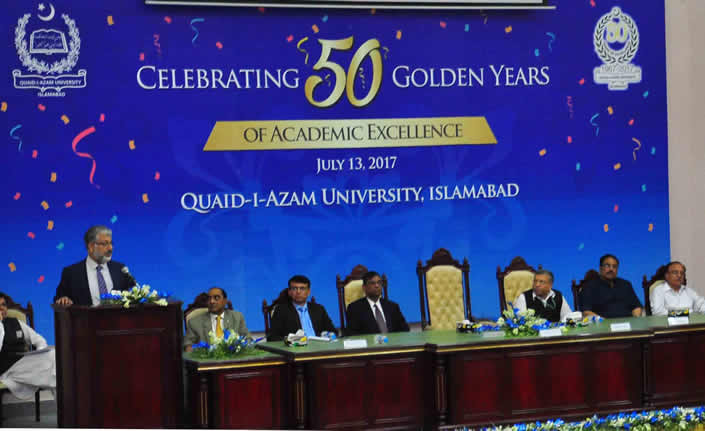 While addressing the ceremony Dr. Mukhtar Ahmed Chairman Higher Education Commission (HEC) congratulated the university as QAU has marked 50th anniversary of its creation. He said that certainty it’s the time to celebrate but also to set targets for next 50 years. He said that achieving the top position is important but sustaining it needs hard work and commitment. He assured his full support to meet the financial needs of the university.

Dr. Javed Ashraf, Vice Chancellor, Quaid-i-Azam University said that he was delighted to see the enthusiasm with which the alumni, faculty staff and students have come together to celebrate this joyous moment. He said that during these fifty years, university has established itself as leading institution of higher learning through its contribution to the knowledge-base and human resources of Pakistan. “QAU is producing quality research on shoestring budget, we hope HEC and government would pay special attention to meet university’s development needs” said the Vice Chancellor.

In his welcome address Dr. Farhan Saif, chairman special coordination committee on 50 years of QAU shared the historical journey of the university. He said that QAU was established in 1967. In the beginning, the University was housed in Satellite Town, Rawalpindi and later on moved to its permanent Campus in Islamabad on October 1971. He also briefed the audience regarding initiative by the committee including the distinguished guest seminar series, establishment of donation account, Quaid-i-Azam corner and social media campaign to celebrate of the 50th years of the university. He said that a number of activities as part of the 50th year celebrations of the university have been planned for the year ahead

Dr. Muhammad Ishtiaq Ali, President Academic Staff Association congratulated the faculty and lauded the efforts of the organizers and support staff for organizing the successful event. A cake cutting ceremony was also held while commemorative shields were also distributed among star alumni of the departments of the university who made extraordinary contribution to their respective fields. Later on Quaid-i-Azam Corner in the central library was inaugurated while students from Quaidian Dramatic Club performed in the Geophysics auditorium. A large number of alumni, diplomats, government officials and students from across the country attended the family gala. President QAU Alumni Association Sikandar Ahmed Rai, Vice Chancellors of the universities of twin cities, former Vice Chancellors of QAU, faculty, staff, alumni and students of the University attended the ceremony.