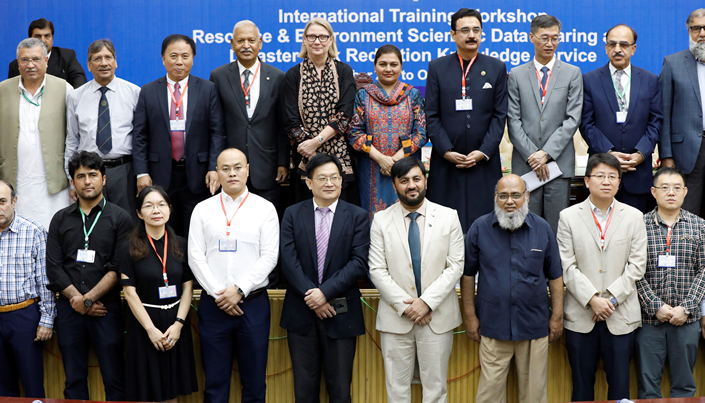 The training program is aimed at providing technical training support for the establishment of a data sharing network serving the China-Pakistan Economic Corridor. The program would also provide software’s, standards services, resource construction and other technical training.

While addressing the inaugural ceremony Chinese Ambassador to Pakistan Yao Jing said that during the tenure of the current government of Pakistan, the China-Pakistan Economic Corridor (CPEC) project has moved to a new stage of broadening the cooperation. He said areas like industry, agricultural and social sector especially education have been included and emphasized in the CPEC Project. The Ambassador informed the audience that through major scholarship program all the top universities and institutions in China will be open for Pakistani talented students. Furthermore Chinese government will provide 100 smart classrooms and seven agricultural research centers to the various Universities of Pakistan.

“China-Pakistan Joint Research Centre on Earth Sciences (CPJRC) at QAU is a pioneer in the area of educational cooperation. It is solidly funded and well planned projects by both governments. The Chinese government, embassy, relevant ministries and Chinese Academy of Science would be a strong partner in the project” added the Ambassador.

Prof. Dr. Muhammad Ali, Vice Chancellor, Quaid-i-Azam University said that it’s a historic day for Quaid-i-Azam University, as we have inaugurated and formally started the activities of the mega project, China-Pakistan Joint Research Centre on Earth Sciences (CPJRC). He said its Rs.8.4 billion worth project mainly funded by the Chinese Government. He also mentioned the need of cultural joint research centre between the two countries, to which the ambassador of China agreed. He thanked the Chinese Government, Higher Education Commission (HEC) and Chinese Academy of Sciences for the efforts to materialize the project.

Earlier Prof. Hong Tianhua, Director, CPJRC briefed the audience regarding the Project and aim of the Workshop. He said the objective of the center is to join efforts of both Chinese and Pakistani scientists for carrying out scientific research on natural disasters, environment, ecology, climate change and sustainable development in Pakistan, especially along the China-Pakistan Economic Corridor. “To help and strengthen the capacity building of the young scientists in Pakistan, CPJRC will also conduct a series of training workshops in the years to come” said the Director.