Balochistan Chief Minister Dr Abdul Malik on Monday stressed the need for bringing Balochistan in the mainstream of political, social, and economic landscape of the country.

“The inclusive and pluralistic approach is the dire need to address the grievances and deprivation of the people of Balochistan,” he said while addressing the inaugural ceremony of International Conference on Balochistan: History and Culture. Dr Abdul Malik Baloch said that the pressing issues that today’s Balochistan is facing must be addressed on priority basis.

He remarked “Culturally, economically and linguistically the province is very much diverse. Speaking different languages, they have similarities in their beliefs, moral orders and customs. The people of Balochistan are known for their hospitality. Open heartedness is one the most lovely features of the people of Balochistan”.

He was delighted that the NIHCR, QAU has organized the international event on Balochistan to promote an understanding in a diverged society. This event will provide new horizons and set new precedents for giving space and importance to the underdeveloped and smaller provinces, he said.

In his welcome address, Dr Eatzaz Ahmad, Vice Chancellor of Quaid-i-Azam University, Islamabad and the chief organizer of the conference, said that the QAU has been serving for the last 49 years to fulfill the needs of the higher education and research work in the country. Holding such seminars, symposia, and conferences is one of the goals of our university to enhance and promote the understanding of unexplored and ignored issues and fields, he said.

“Balochistan with largest proportion of land and thin population is in the limelight in the contemporary affairs. There is a dire need to think beyond its vitality as a geostrategic location. It is the time to think beyond the conflicts and understand its marvelous rich culture and history, Dr Eatzaz Ahmad observed.

Prof Dr Tahir Amin, Director National Institute of Pakistan Studies (NIPS) QAU, Islamabad delivered his brain storming key note address of the conference. Discussing multiple narratives about the current scenario of Balochistan he stressed upon the state to take some steps to coup with the complexity of situation effectively.

The NIHCR head Sajid Mehmood Awan, in his address, said it is a regular feature of the NIHCR to organize conferences, seminars, symposia, workshops, round table sessions and trainings for variety of issues and subjects. So far it has organized 18 National and International conferences and countless seminars, he said.

He also shared the inaugural resolution of that conference which says that “deadlock cannot resolve deadlock; only discourse can do that. Thus this conference initiates a discourse for resolution of every sort of deadlock on academic front”.

They were of the view that Balochistan is rich enough in terms of ancient history and culture. This history garners a very special importance in relation to the development of Indus Civilization. The earliest settled villages in Balochistan date back to the ceramic Neolithic (c.7000-6000 BCE) including the site of Mehrgarh. The earliest built tomb on the Pakistani soil is located in Bela town and belongs to Muhammad bin Harun who was an Arab governor of Makran besides the historical tombs of the Jams of Lasbela. In 1520, under the leadership of Mir Chakkar Khan Rind, Balochs were ruling over Balochistan.

They viewed that British Balochistan was predominantly a Pashtun province which voted for affiliation to Pakistan. The valiant Balochs had also resisted strongly against the British colonial rule in different areas of Balochistan for protecting their lives, land and honour. Being a Governor-General’s province, running the affairs in Balochistan, after the independence of Pakistan in 1947, was the “special responsibility” of Quaid-i-Azam Mohammad Ali Jinnah.

The speakers informed that Balochistan holds a rich history of being the part of the ancient kingdoms such as under Ashoka and then attacked by the Mongols in thirteen century in which its polity was greatly destroyed. The advent of the British in the nineteenth century witnessed the region as ruled in multi zones. Baloch political leaders Sardar Ataullah Mengal, Khair Buksh Marri and Akbar Bugti were the ones who played a prominent role in Baloch politics. Baloch, who constitute the majority of population, has always been in conflict with state for greater control of the resources, yet it has a troubled history and problematic relations with the Centre since the inception of Pakistan. 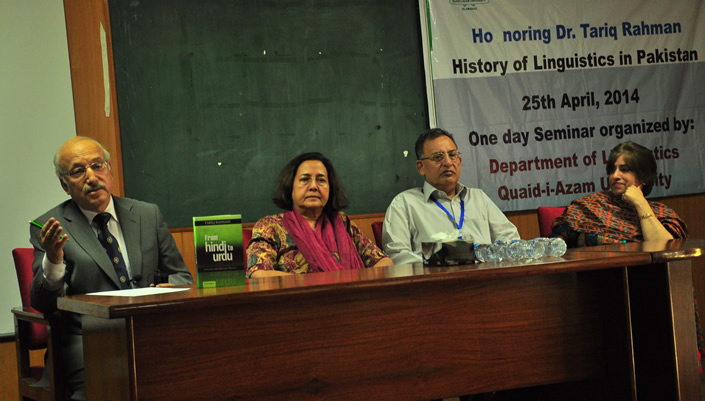