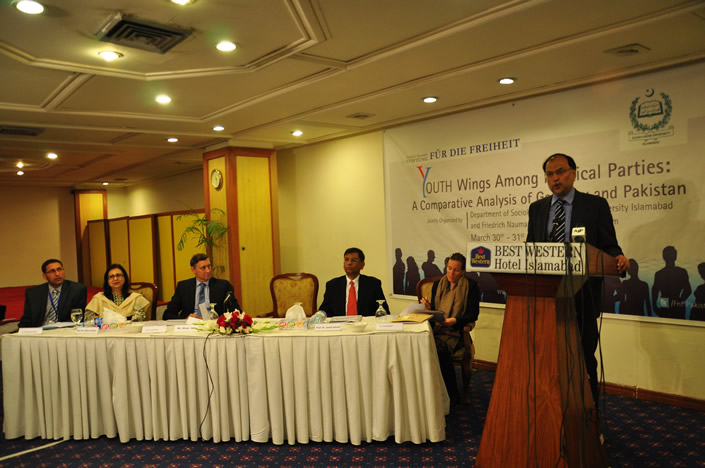 The two-day international conference on “Youth Wings among Political Parties: A Comparative Analysis of Germany and Pakistan” began here on Monday. The conference, which is being organized by The Department of Sociology Quaid-i-Azam University, Islamabad in collaboration with Friedrich Naumann Foundation (FNF) Pakistan, is aimed at to understand and analyze the youth participation in political activism. An important aspect of the conference is to draw policy recommendation, to promote the youth engagement especially in Pakistan.

Federal Minister for Planning and Development, Ahsan Iqbal while addressing the inaugural session of the conference said that Pakistan is blessed with almost two-third of its population which can be characterized as young population. “We have an opportunity and at the same time a critical challenge to harness the talent and integrate the youth in the national development”. He said that Ministry for Planning and Development has started a number of programs including “young development fellowships” for youth of Pakistan to become a part of development. He urged the social scientists and academia for establishing a national task force to assess, how war against terror is shaping the perception and outlook of our youth. He also appreciated the conference organizers who brought international and national experts and provide a chance to the political parties to debate the scholarly work.

QAU Vice Chancellor, Prof. Dr. Javed Ashraf said that for achieving the goal of national development we need to equip our youth with education, skills and training. “We have an enormous amount of talent in the country and now it is our job to give them conducive environment” he added.

Earlier Dean Faculty of Social Sciences, QAU, Prof. Dr. Aliya H. Khan delivered the welcome speech and defined objectives of the conference. She emphasized on using the energy and potential of youth in a positive way. She further said that youth plays a very important role in strengthening democratic process and transitory politics.

Dr. Cyrill Nunn Ambassador of Federal Republic of Germany to Pakistan analyzed and compared the prevailing difference in youth in Pakistan during the last two decades; he suggested that awareness among the youth can be increased by giving them respect and more opportunities. He said that youth is the vital component of the population and our destinies are linked together. He also appreciated the dynamic role of the youth in Pakistan and stressed the need to rise to the occasion and make a difference.

Dr. Muhammad Zaman, Head of the Department of Sociology (QAU) gave the rationale of the conference and stressed the need to create linkages between academia and political parties. He said that special attention should be given to the civic and democratic values, policies, youth activism, leadership and their national and transnational networks. He said that there is a need to build strong linkages with youth through education, employment and economic engagement which will lead to political and strategic empowerment.

Seminar on “Unification of the Korean Peninsula” by H.E. Dr. Song Jong-Hwan