Seminar on “Colonial Law: FCR and the Future of FATA” by Prof. Dr. Robert Nicholas

Dr. Robert Nicholas, Professor of History, Richard Stockton College, University of New Jersey, USA while addressing a seminar at the School of Politics and International Relations on “Colonial Law, FCR and the future of FATA” gave an insight on the FCR.

He explained that with the expansion of British colonial grip of the Indian Subcontinent in the 19th Century, there arose problem of management. Britain established their own system of Police, Justice and Indian Penal Code of 1860. British also introduced Punjab Frontier Crimes Regulation in 1887 under which the Governor in Lahore was vested with the authority to address all the problems in the Northwest Frontier Province. This Punjab Frontier Crimes Regulation was renamed Frontier Crimes Regulation after the separation of the NWFP from Punjab in 1901. FCR was established by British as authoritarian, centralized control to bring peace, justice and stability in the border areas and under this, British imposed arbitrary capital punishments. After the British withdrawal from the area in 1947, the Pakistani political agents used the same set of regulations and administrative structures to oversee to administer the renamed Federally Administered Tribal Areas (FATA).

There have been various attempts to introduce reforms in FATA. In 2013, ten important mainstream Political Parties organized a Joint Committee to bring forward a reforms report to introduce amendment in Constitution and reforming the Local Bodies Elections, etc. All of those Political Parties forged consensus on the issue. The Frontier Reforms Report of 2016 is also a very comprehensive report, concluded with immense participation of people serving establishment, knowledgeable authorities about the history of FATA. Prof. Nicholas said that 70 important years have been wasted discussing how and what could be done, without taking any positive action regarding the solution of issue. Now when the Frontier Reforms Report has come, no more time should be wasted. The issue has international significance as peace and prosperity in FATA is connected with the prospects of peace and prosperity in Afghanistan and vice versa. The only way forward is to merge FATA with KP, along the lines recommended in the Frontier Reforms Report for a period of five years and incorporating it in constitution as well.

Earlier, Dr. Nazir Hussian, Director SPIR welcomed the guest and said that today’s talk is important as the issue is being discussed presently in Pakistan. Prof. Dr. Javed Ashraf, Vice Chancellor thanked Prof. Robert Nicholas for coming and enlightening us on this very important topic. 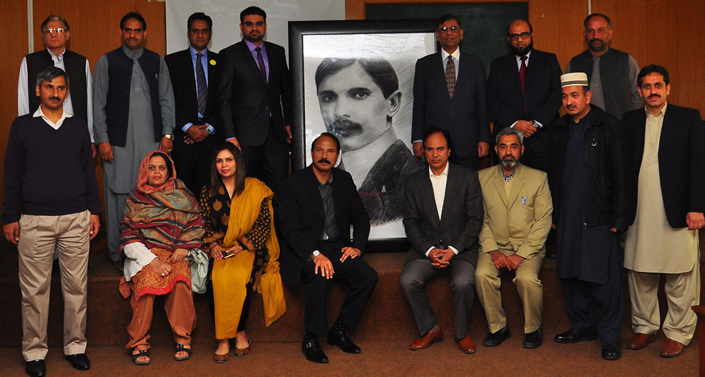 Portrait Delivery to the Central Library from the Department of Anthropology