A seminar on “Criminal justice system in Pakistan” organized by the School of Law, Quaid-i-Azam University (QAU) was held recently. The objective of the seminar was to provide students an exposure of investigation process, admissibility of evidence in criminal cases, and trail and post-trial proceedings.

Riasat Ali Azad, advocate, Supreme Court of Pakistan, encouraged the students of law for choosing the career as law practitioner. He talked about the criminal justice system of Pakistan, describing pre-trial procedure, pointing out lacunas in it. He highlighted the sensitivity of providing justice by quoting a Hadith which suggested that a judge should be very careful in giving judgments. He may release a100 guilty ones but must not sentence even a single innocent one. This proves that the case has to be proved beyond any shadow of a doubt if the person is to be sentenced.

Arshad Nawaz, Director, School of Law gave a brief introduction of the School of Law, talking about the struggle the School of Law has faced through the last two years. He discussed the rights of the accused, suspects and alleged criminals. He talked about what could be the remedies of criminal activities and how crime would possibly be lessened from the society without punishing criminals very harshly.

He gave several references including Universal Declaration on Human Rights which lays out the principles like principle of equality and dignity, i.e. even criminal is a human and should be treated with complete human dignity. Some of his other references were International Covenant on Civil and Political Rights 1966, pre-trial rights, the UN Standard Minimum of Non-custodian measures, 1986.

Tariq Mehmood Jahangiri, the guest speaker, told the disappointing situation of criminal justice system in Pakistan that 90% of the accused are acquitted even if they’re criminals just because solid evidence is not presented in courts due to the lacunas in investigation process. He said that it is so unfortunate that people fear to get involved in courts procedures without realizing the fact that it is their duty as a citizen to assist state in providing justice by accepting and fulfilling their due responsibility as a witness.

Dean Faculty of Social Sciences, Prof. Dr. Aliya H Khan, said the seminar was a unique opportunity to acquire a deep understanding in the coordination of various stake-holders involved in the Criminal Justice System of Pakistan, including police, courts, prosecution and defense. She also admired the organizers of the Seminar, thanked the guests that they shared the knowledge with students. 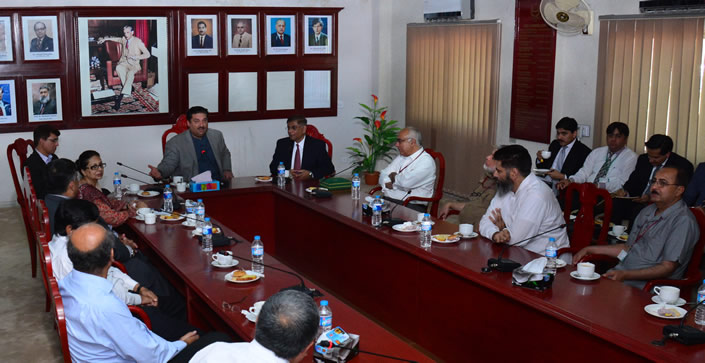