Seminar on “Discourse on National Narrative”

Mr. Waheed Hussain while highlighting the fundamentals of “National Narrative”, over seven decades of Pakistan’s history after Quaid-i- Azam Mohammad Ali Jinnah’s demise, explained this phrase is the most confused one. The Address of 11th August, 1947 was a clear narrative for a separate homeland, emphasizing equality, brotherhood and national integration, but the death of the father of the nation and subsequent events, threats from the neighbors and the upcoming rulers, who were more dictators rather than leaders in their running of the country, created constitutional crises and many problems for national integration. All this culminated into lack of actual narrative at national level. The speaker stressed over the need for debates and discussions in all the governmental and research bodies and institutions of every sphere with scholars, both academic and religious, to take guidelines from Address of 11th August to formulate national narratives on important national and international level issues.

According to Azhar Ahmed’s contemplation, the term ‘narrative’ means the format or the framework in which one wants to convey his own point of view regarding a certain issue, to another person and impress or convince him with the validity and usefulness of that idea. The argument propagated needs to be equipped and supported with the right type of data and preparation in order to impress the other with its viability. He put limelight over the significance of the national integrity and national consensus for building a common national narrative across the nation over vital matters such as Kashmir issue or the War on terror. Forging national consensus would require hard work on the part of Government institutions, Academia and intellectuals.

Zafar Ullah Khan, Executive Director PIPS, articulated his own version of definition of a ‘Narrative’ which he believes is the sum total of all the conversations taking place in a polity or the opinions which the inhabitants of a society, cherish.

Throughout zig-zagged history of Pakistan, many times national consensus was forged and national narrative was built but at many other times it was destroyed. Pakistan was the first amongst the Muslim states to codify the notion of Sovereignty in its Objectives Resolution and this marked the first consensus in Pakistan. Dictatorships then destroyed what the polity had formulated. Federalism, another narrative, was destroyed in the quest for unification and One Unit System. The notion of Provincial Autonomy, a salient feature amongst the 14 Points of Jinnah, was seized from the provinces which culminated into many ethno- centric differences and ultimately dismemberment of Pakistan. Ultimately, it is Democracy which unifies the people of Pakistan. Dialogue and conversation is important either to be convinced or to convince.

Concluding the Seminar, Dr. Nazir Hussain accentuated the necessity for dialogue and debate so that the silent majority, which is being dominated by the violent minority, could speak up and forge national consensus and national narrative on significant issues. 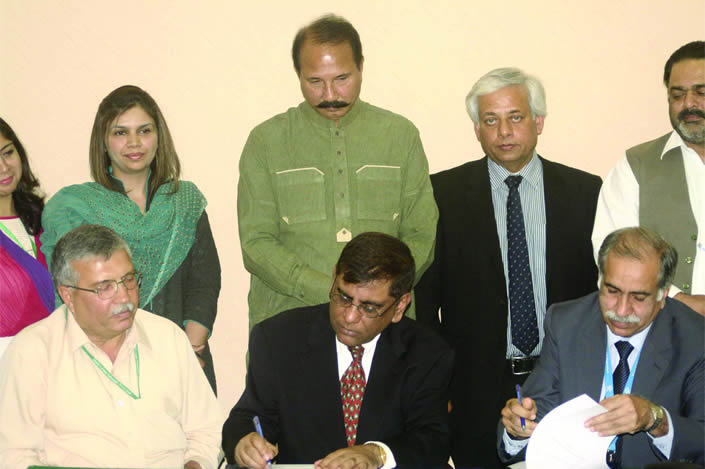 MoU Signing Ceremony held at the Department of Anthropology, QAU