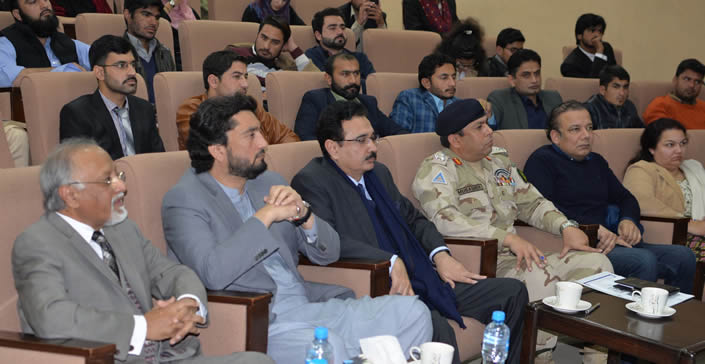 Seminar on “On Campus Drug Abuse in Metropolitan Cities of Pakistan”

To dispel the reverberation about the exaggerated figures on drug abuse in educational institutions of metropolitan cities of Pakistan, the Department of Sociology organized a seminar to share the findings of a survey conducted in collaboration with higher education commission of Pakistan. The initiative was taken to produce reliable data to understand on campus drug abuse behavior and sensitize the youth on this very serious matter. The seminar was based on the data collected from public and private educational institutions of four major cities of Pakistan under HEC Thematic Grants Project. Dr. Imran Sabir, Assistant Professor at the Department of Sociology, QAU, who is also the principle investigator of the project, shared the findings with the stakeholders in the seminar held on 7th January 2019 between 11am and 2pm in DSS hall of Quaid-i-Azam University.

Dr Imran Sabir stressed that the reverberations and figures based on a secret report by an NGO as reported by our media created confusion and hype about unusually higher rates of drug abuse in educational institutions of metropolitan cities. The research was carried out on a sample of 4997 students in major educational institutions (schools, colleges and universities) of four metropolitan cities of Pakistan including Islamabad, Karachi, Lahore and Peshawar. According to the initial findings of the Survey conducted by the research team of the Department of Sociology, twenty one percent of the surveyed students from both public and private institutions considered the drug abuse not a risky behavior. However, most of the students (79%) were of the view that drugs can have negative consequences on health and social aspects of life, including their family, education and job. Dr. Imran Sabir asserted that peer pressure plays crucial role in adopting on campus drug usage. However, he affirmed that not more than two percent of the students are regular drug users in educational institutions, according to the findings of the survey.

Mr. Sheharyar Afridi, Current Minister of State, Ministry of interior was the Chief guest of the seminar. He emphasized the need of exemplary practical measures in society particularly in educational institutions. He showed commitment to eradicate the issue through effective legislation. He stressed on the supremacy of Law and assured that Government will take strict action against those who are inflicting the drugs in educational institutions. He stated that Academia and Media are key stakeholders who can play effective role in curbing the issue. Finally, he appreciated the Department of Sociology for the efforts to organize this important event to highlight the realistic picture of drug abuse in educational institutions.

Dr. Wiqar Ali Shah, Dean Social Sciences, highlighted the role of youth in restraining the drug abuse in educational institutions. He said that we dream for “Drug Free Society”, and for that all of us need to work collectively as a team. Later Dr Muhammad Ali, Vice Chancellor QAU shed light on the evils of drugs. He stated that the abuse of drugs is linked to numerous social problems including health issues, terrorism, suicide and damage the fabric of society. He gave message to youth to be vigilant and report the incidents if they come across any activity relating to drug abuse. He said that youth must learn to say no if they are offered to use drugs. He acknowledged the efforts of Sociology Department particularly Dr. Imran Sabir who is the organizer of the seminar.

The seminar proceeded with the talk of renowned journalist in Pakistan Mr. Muhammad Amir Ghauri the group editor The News. He discussed how the issue of drug abuse can be curtailed and focused on the role of community and youth. He emphasized that youth is the future of a nation and may act as neighborhood watch force. They should inform police and use media to highlight the issue as he considered that every individual himself is a journalist to highlight such evils.

Mr. Sabino Sikandar Jalal, Joint Secretary Ministry of Anti-Narcotics, highlighted the efforts of government on this issue. He acknowledged that although the ratio of drug abuse has decreased but the issue still requires extra ordinary efforts. On policy he mentioned that the ministry has passed a resolution in Vienna, “strengthening efforts to prevent drug use in educational institutions” which aimed to promote drug free environment in educational institutions.

He further described the measures and steps to curb this particular issue.

Dr. Samina Qadir, Vice Chancellor Fatima Jinnah Women University, discussed the reasons for drug abuse among youth. She also stressed on the role of socialization and education in prevalence of drug abuse among youth. She stated that education is the key to deal with the issue. the key factors that contribute to drug use are peer pressure, self-medication, loneliness, reaction, depression, feel good attitude, stress and low self-esteem.

Brig. Mubasher Kazmi joined on behalf of DG ANF Major General M. Arif Malik. Brig Mubasher discussed the existing patterns of drug usage in Pakistan and shed light on the statistics and the efforts of anti-narcotics force to counter the menace. He stated that one of the major challenges for ANF is to restrain the trafficking of drugs in Pakistani society as it is the neighbor to the world’s largest opium producer. While acknowledging the efforts of ANF, he mentioned that ANF destroyed 385 metric tons of drugs, worth $4.28 billion.

The ceremony ended with the vote of thanks by Dr Sadia Saeed, In-charge Department of Sociology to all the guests, participants and representatives of the media. 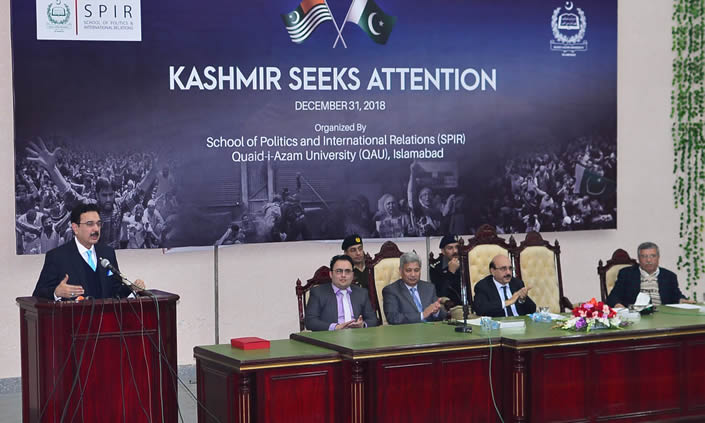