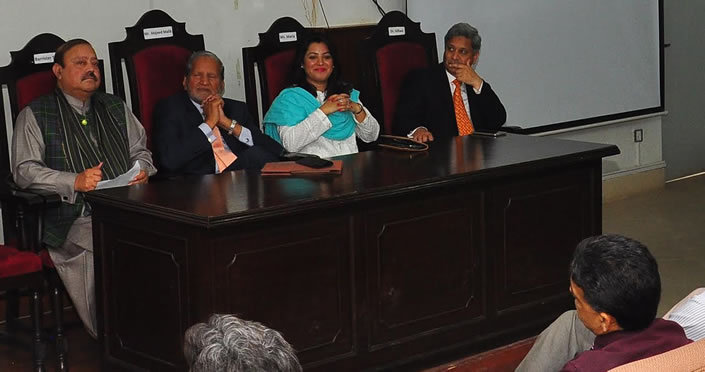 Dr. Nazir Hussain Director SPIR, while welcoming the guests said that this seminar is the first among the series of seminars on Kashmir issue to be held to apprise the students of efforts made by Pakistan. He said that Pakistan is the only state in the world, which has helped the Kashmiris openly. Ms. Maria Iqbal Tarana highlighted the role of social-media icon, Burhan Wani in the uprising and freedom movement of 2016. She also highlighted his assassination that created ripples across Kashmiri youth. Dr. Touqir Gillani highlighted the role of Pakistan and the indigenous people of AJK in the Kashmir issue. He demanded that Pakistan should stick on one stance and whole-heartedly support the Kashmiris to pursue their cause of liberation and self- determination. Barrister Sultan Mahmood, former Prime Minister of AJK stated that Kashmir is an unfinished agenda of Partition, which has created instability in the South Asia since both India and Pakistan are the Nuclear Powers and may reach nuclear Armageddon over the question of Kashmir. He suggested that the Kashmiris all over the world and between the two parts should be allowed to conduct intra-state dialogues amongst themselves to form a strong force in eliminating the Line of Control in a similar way how the Berlin Wall fell. Justice Majeed Malik, former Chief Justice of AJK paid tributes to the martyrs of Liberation movement. He threw light on the significant part played by Quaid-i-Azam Mohammad Ali Jinnah for gaining Partition from British crown. He demanded that since there is no forum where entities other than states can advocate their cases, so Pakistan should let Kashmiris advocate their own case in a better way at the international forums.

The seminar was attended by a large number of Kashmiris from AJK, QAU teachers and students, and media persons.

Seminar on “Evaluation of Research” in Pakistan