Seminar on “Road Safety in Metropolitan Cities of Pakistan”

To raise the awareness about the issue of road safety in Pakistan, the Department of Sociology, Quaid-i-Azam University organized a seminar in collaboration with Higher Education Commission of Pakistan. The initiative was taken to produce reliable data to understand the behavior of road users and sensitize the youth on this very serious matter. The seminar was based on the research work under HEC Thematic Research Project of Road Safety in Metropolitan Cities of Pakistan. Dr. Muhammad Zaman, the Principle Investigator of the project at the Department of Sociology, Quaid i Azam University, discussed the overall state of road safety in the country and lacunas in legislation, with the stakeholders.

Dr Muhammad Zaman stressed and explained the current state of the road safety globally and nationally. He mentioned that 27582 people are victim of the road safety annually as per WHO 2018 estimates. He elaborated the transport infrastructure in Pakistani society. Interestingly, only 16% of the overall vehicles in the world are found in Asia Pacific Region, whereas, the share of total accidents is 44%. He further identified several important gaps in legislation. Only two convictions were found in the history of Pakistan due to road crashes. It means no one in the country is interested to realize the importance of the state of road safety affairs, he stressed. He proposed to fill the gaps in current Standard Operating Procedures which include: to reform the weak penalty system, devise a conviction law in case of fatalities as a result of road accidents, and to formulate a Child Restraint Law. He further discussed that a number of legislations are not implemented adequately and are dormant in legislative system. Moreover, he stressed upon the need of the centralized public transport system as well as centralize the licensing system, maintenance of standards for vehicles by the legislative bodies. Although, the laws of fastening seatbelt and putting helmet exist but are not implemented effectively for all the occupants. There is dire need of a standard public transport system in metropolitan cities of the country. He asserted that it has been argued on the state level that the Road Safety issue could not be catered due to the lack of funds but in reality, it is more of a management issue. Further, he highlighted the absence of Smart Parking which can reduce influx of traffic. Similarly, 40% of automated signals in Pakistan are out of order. He asserted that there is a need to impose heavy fines on traffic violations and these fines must be equitable according to the cost of the vehicle. In addition, he emphasized that it is the need of hour to reduce the speed limits in urban areas which is currently very high. As, 5km/h reduction in speed can reduce 30% of the fatalities. Lastly, he presented tribute to the traffic personnel who are serving the public regardless of the harsh circumstances. Later, he discussed that, people usually relate the human error with fate. He pointed out this phenomenon to be completely a man-made hazard.

The Chief Guest, Mr. Ishfaq Ahmed, DIG, Motorway Police acknowledged the efforts of the Department of Sociology for organizing this event to address such a noble cause. He imperatively discussed the initiatives taken by the Islamabad Traffic Police, including the Urdu Sign Boards, increasing the amount of fines on violation of traffic rules. He appreciated the proposal of Dr. Muhammad Zaman to centralize the Licensing system. He pointed that every individual must play his/her role in order to achieve the goal of safer roads. He requested the Department of Sociology to collaborate with the Traffic Police in educating the masses about Road Safety and Road Usage.

The seminar proceeded with the speech of Dr. Abdur Rehman, District Emergency Officer. He talked about his post-crash response. He stated that Road Crashes are one of the leading causes of deaths. Globally, 1.3 M people die annually. The severity and lethalness of this issue was highlighted by making a comparison with the terrorist attacks. He asserted that, road crashes have more devastating effects than the terrorism. He further highlighted the miseries created by the road accidents. He also discussed the active role of Rescue 1122 to ensure the prevention of post-crash incidents.

Hassan Shehzad, Lecturer Media Studies International Islamic University, Islamabad, explained the crucial role of media to supplement the agencies to raise the awareness on the issue under discussion. He focused on the role of students as change-maker in the country. He suggested that the students should make use of technology to make videos and highlight incidents regarding this issue.

Naveed Satti, Senior Journalist, Roz TV, shed light on the key aspects of road using behavior. He further discussed the issues in the current body of legislation raised by Dr. Muhammad Zaman and added the lack of implementation to it. He criticized the role of Government in this regard. He highlighted the issue of shortage of man power in Police Department to meet the need of rising population. He said that there is a need of a separate Ministry of Transportation/Road Safety. Mr. Ishtiaq of ITP, said that Road Safety is a behavior which depicts how civilized a Nation is. He further stated that improper socialization is a key factor that contributes to Fatal Road incidents. Mr. Iftikhar Hussain Sherazi, Bureau Chief, DAWN News, discussed the factors that aggravated the issue of Road Safety in Pakistan. The major reason that he associated was that people are inhibited to take things for granted. He said we need to reevaluate our behaviors. We all need to be aware of the Traffic rules and abide by the State laws. This can be the only way to safer roads in future.

Mr. Amir Ghouri, group Editor, The News, stated that the basic dictum of law is that, ‘breaking law has no excuse’. He further said that over speeding, overloading, unawareness of rules and negligence on part of parents are some of the leading causes of road crashes. He proposed that there is a need to devise a mechanism in order to sensitize children. As our society is quite disorganized so we need to sensitize children and youth so we have safer places to drive. School education and training should be imparted in the country.

Lastly, Dr. Sadia Saeed, In-charge Department of Sociology, asserted that parents need to sensitize their children about the seriousness of this matter. She paid her gratitude to all the prestigious guests for being present for the noble cause. The ceremony ended with the distribution of souvenirs to all the worthy guests. 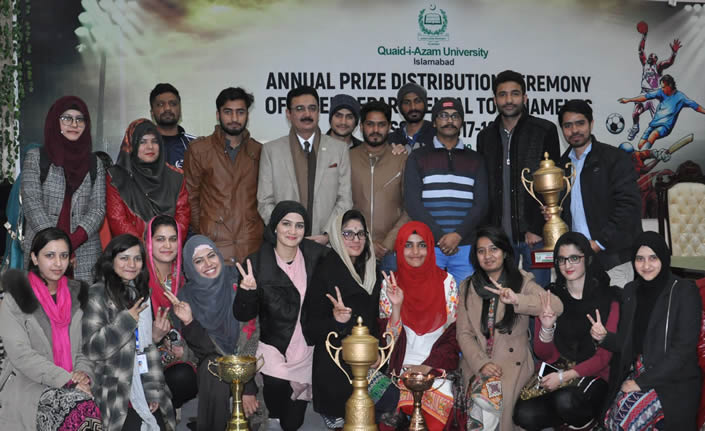