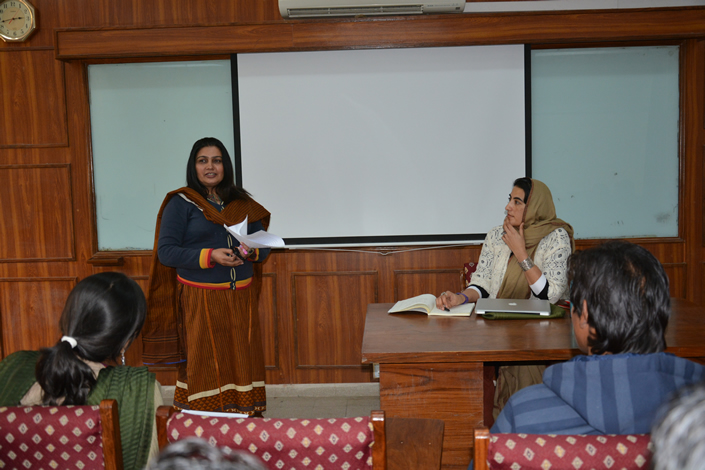 Seminar on “War and What Remains: Everyday Life in Contemporary Afghanistan”

The situation in the post 9/11 scenario has deteriorated in Afghanistan in terms of violence and humanitarianism says Dr. Anila Daulatzai at a talk on “War and What Remains: Everyday Life in Contemporary Afghanistan” organized by the Department of History. Dr. Anila provided an anthropological insight of the war on terror and its implications on the Afghan society. She expressed that the violence inflicted in the name of global war on terror has further created violence and has, thus, led to the emergence of issues like internal displacement of refugees and widowhood.

The critical examination of the war on terror as unfolded in Afghanistan highlights the duality in the nature of war. The war aimed at eliminating extremist and violent elements in the Afghan society has further stimulated such elements. It also suggests that the dynamics of violence are not taken into thoughtful consideration not only by policy makers but also the scholars. The acts of violence are justified by the modern liberal states such as U.S. on moral grounds and this has also influenced the Taliban perception of such acts in the name of self-defence. The rationalisation and justification of violence in the name of self-defence construct the fighter ands insurgent both as killable.

Dr. Anila also emphasised that the anthropological study of the phenomenon of violence of war on terror needs scholarly attention and many understudied aspects of the issue should be identified and researched. This will not only help in better understanding of the issue but also will contribute in eliminating acts of violence in war launched in the name of self-defence.

MoU Signed between QAU and TiKA for Infrastructure Development