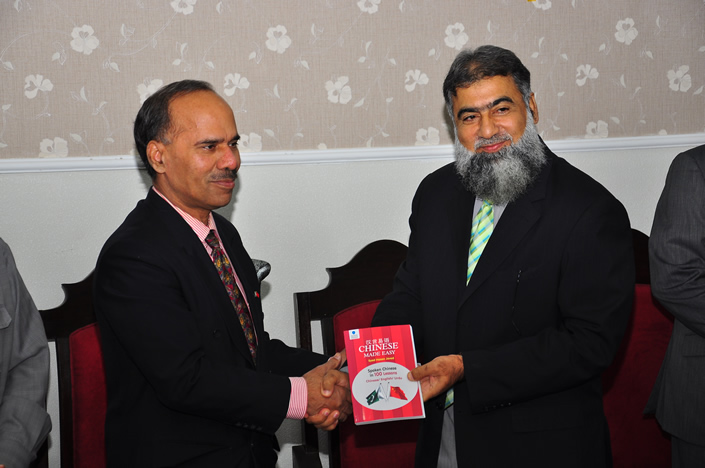 Syed Hasan Javed, Pakistan’s High Commissioner to Singapore, author of ‘Chinese Made Easy’, joined Quaid-i-Azam faculty, scholars and students at the seminar hall: School of Politics and International Relations Quaid-i-Azam University to give an insight into the history of the cultural and religious relationship between Pakistan and China.

The book launching ceremony of “Chinese Made Easy” and a seminar on “The Gandharan Buddhist Heritage: A bond between Pakistan and China” organized by the Taxila Institute of Asian Civilizations (TIAC), QAU. Mr. Javed encouraged students to retrace the historical context of Buddhism is vital as only limited research has been conducted on this area which still needs to be explored.

‘Chinese Made Easy’ with its unique features is likely to become the most favorite learning Mandarin book first of its kind in Pakistan and also in the world. This book has Chinese characters, Pinyin, English translation, Roman Urdu, Urdu pronunciation and translation, in addition to rich vocabulary and specific needs based lessons. It also includes Chinese language metaphors as pearls of wisdom as an ‘icing on the cake’.

While expressing his gratitude to Mr. Javed in initiating academic collaboration abroad Prof. Dr. Masoom Yasinzai, Vice- Chancellor, QAU said “Today’s seminar garners special importance due to two facts. First, it enlightened us about so many aspects of our history. Secondly, it is valuable in terms of contributing to our historical consciousness and in turn giving us a clear vision about our future course of action. I believe that such kind of discourses and activities can be used in our nation building process.”

The Vice Chancellor further said: “We are looking forward for signing MoUs with the Buddhist Federation of Singapore and the Institute of South Asia, a step which will further the cause of knowledge and research in Pakistan.” He also apprised the audience that Taxila Institute of Asian Civilizations, QAU has also signed a MoU with the IsIAO Italian Archaeological Mission aiming at the promotion of academic collaboration between the two institutes. Similarly, its MoU with the Department of the Antiquity Sciences, La Sapienza of Rome, is also an encouraging step to promote scientific co-operation between Pakistan and Italy.
Mr. Javed mentioned that knowing the Chinese language will help us in fostering the diplomatic relationship with China, undoubtedly an important country due to its economic stability in the region. He explained different sources of Chinese civilization value systems, ancient civilization contacts between Pakistan and China, and how ancient Chinese missionaries travelled through/ to the Gandhara regions of Pakistan; even some Buddhist pilgrims visited Fata. Author illuminated the audience how Buddhism became popular in China due to its appeal to moral, virtues, purity of life and spirituality which are basic attributes of Chinese people.

Prof. Dr. M. Ashraf Khan, Director, TIAC also expressed great pleasure for hosting such a grandiose academic event. According to him: “The book is of vital importance in respect to the bilateral relations between the states of Pakistan and China and the people of the two Republics. Of course, one of the great religions of the world, Buddhism, reached China from Gandhara, the later being one of the great centres of this religion. Many Buddhist teachers went to China for the propagation of Buddhism. I hope that the speech by Mr. Javed will cover the scope of this important episode of our history.”