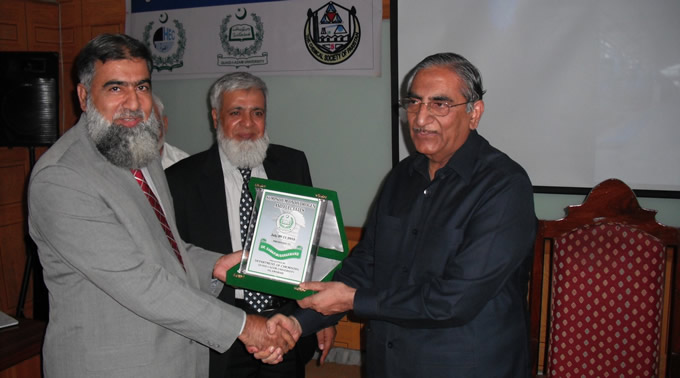 Development of hydrogen and fuel cells has become a promising energy source of the future worldwide to ensure clean environment. A three-day ‘Symposium on Hydrogen and Fuel Cells’, first of its kind in Pakistan, was held in the Department of Chemistry, Quaid-i-Azam University, Islamabad to deliberate upon the promotion and development of hydrogen and fuel cells energy sources besides promoting interaction between the workers of the area nationwide. More than hundred scientists and engineers participated in the Symposium. About forty five research papers were presented in ten technical sessions. The presentations highlighted on production & storage of hydrogen, development of catalyst materials, components and different types of fuel cells.

Dr. Samar Mubarakmand, Member Science and Technology, Planning Commission of Pakistan gave a presentation on gasification of the underground Thar coal in the jam-packed Chemistry Auditorium on the concluded day in which he demonstrated details of the project proving its success based on solid experimental evidences. His presentation was widely appreciated by the audience particularly the scientists and engineers who are working in various areas of energy sources. He pointed out that some of the elements, for some vested interest, are making propaganda against the project; the audience condemned this attitude and wished that the Government should continue to financially patronize the project so that the nation can avail the cheap energy from its own resources.

In the concluding session participants pledged to continue this kind of activity in the future.